The lentil is a very popular product in the central Italy area, it is often associated with the cultivation of the flowers of Castelluccio, but in reality it can be grown in many other areas of the area.

All the lentils produced by the Lavosi Maurizio farm are grown in the hills of the Municipality of Cascia, at an altitude between 800 and 1000 meters above sea level (approximately).

The same is packaged within the company after an initial quality inspection.

All this gives a guarantee of quality and reliability to our products.

Lentil-based cuisine can also be an excellent idea to propose finger food dishes, given their very small structure.

A little history of lentils

The origins of this legume are impossible to identify with certainty as it is probably the oldest cultivated plant. There are traces that may suggest its use as early as 13,000 BC. Its description also appears in books such as Genesis. The original cultivation site is almost certainly the territory in which present-day China is located. It was one of the most used plants by Greeks and Romans and is divided into various types, mainly recognizable by color.

There are green lentils, orange lentils and brown lentils, then they are also divided by size.

The lentils grown in Valnerina have a decidedly brownish appearance and can vary according to the type of harvest and the period of cultivation; often the packages have a rather varied series of elements, between light brown and dark brown.

The size of the lentils grown by the Lavosi Maurizio farm is small, with the presence of an extremely thin, easily digestible skin.

The product made by our farm generally does not require soaking and is ready for use after a short cooking of about 30 minutes.

Below you can discover all the various recipes that we can recommend with lentils, combined with traditional products of our Valnerina.

kosheri of rice and lentils

or try making us a nice dessert like lentil tart

The most classic and well-known preparation throughout the Italian national territory is lentils with sausages or lentils with cotechino, an inevitable recipe in the culture of Italian winter dishes, almost promoted as a “must” for the New Year. 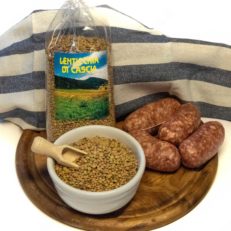